What is bird control and why is it so important?

By definition, bird control is “the generic name for methods to eliminate or deter pest birds from landing, roosting and nesting”.
There are basically only two main reasons why deterring pest birds from commercial properties is so important:

Feral birds are carriers of various diseases, which are particularly harmful to humans via direct exposure to their droppings or through inhalation of the spores contained within their droppings.
They carry the following diseases:

Along with being carriers of diseases, other pests such as ticks, chicken mites, bedbugs, cockroaches and rats are also associated with feral bird nests and come with their own set of health risks.

2.  Pest birds can cause major property damage resulting in loss of income

Pest birds cause damage and corrosion (through the uric acid in their droppings) to:

Their droppings accelerate deterioration which increases maintenance costs and they also emit a foul odour.
Refuse generated by roosting birds can also easily block gutters and drains resulting in fire hazards.
Pest birds can affect many different sectors and industries, for example they can affect the food or agricultural industry in particular as the pest birds may feed off and contaminate foodstuffs meant for human and animal consumption, which if eaten can cause sickness that could prove fatal.
Another example is the transportation industry where pest birds can pose a safety risk to passengers and aircraft as they may fly into an aircraft’s flight path, potentially getting sucked into the jets and causing accidents.

However, not all of the birds that inhabit our cities are considered pests, only certain species are unlucky enough to hold that title. 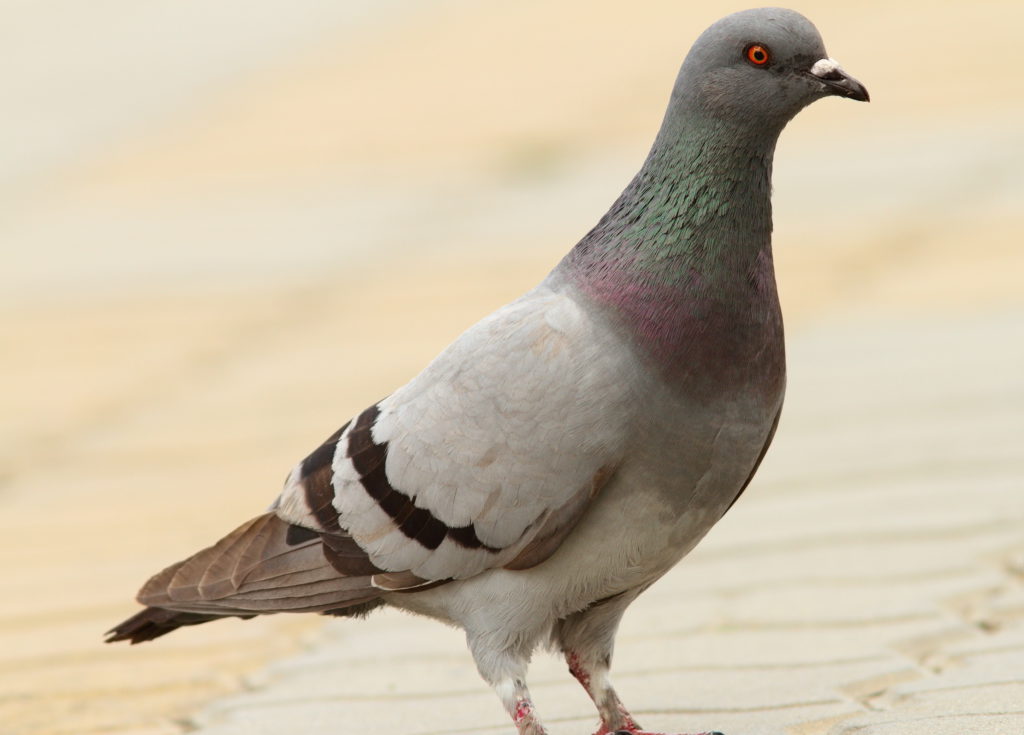 The feral pigeon holds the title for being the most notorious of pest birds in South Africa. These descendants of wild rock doves have a bad reputation because they breed quickly and tend to gather in urban areas, often roosting on roof ledges and windowsills.
Feral pigeons are considered an invasive species and their droppings are amongst the most harmful to humans, containing an acidic component that is highly corrosive.

The feral pigeon’s most distinguishing identification is its white lower back. They also have pale grey wings with two black bars which is a distinctive feature.
Their tails have a black band on the end and the outer web of the tail feathers are outlined in white.

These tiny birds are widely spread across South Africa and are considered a nuisance as they often crowd out native bird species, damage crops and produce an irritating noise and a substantial amount of faeces, especially when large flocks gather.
Identification:
They are small, normally around 16cm long. House sparrows tend to be different shades of brown and grey, with each gender having a different set of identifying colours.
Male House Sparrows have black throats and chest patches with light cheeks and a brown nape. The female has a plain brownish chest and dull eye-stripe.

Starlings are considered a nuisance because of the noise and mess caused by their large urban roosts. They are known to feed on and destroy fruit and crops.
Identification:
Starlings tend to be quite chunky, easily distinguishable from other blackbird species because of their short tail and long, slender bill. They have a glossy black plumage which is speckled with white markings. The white markings tend to be duller during the summer months with fewer speckles.

In South Africa, Indian mynas are an invasive species. They congregate in urban areas and are intelligent and noisy. Due to the Indian mina’s strong territorial instinct, they are notorious for kicking other birds out of their nests and killing their young.
Identification:
They have a brown body, black hooded head and the bare yellow patch behind their eyes. Their legs and bills are a vivid yellow colour. There is a white patch on the outer primaries and the wing lining on the underside is white.
Seagulls – genus Larus

These birds are known to be nuisances in coastal areas. They are considered scavengers and will eat virtually anything, even garbage. Flocks of seagulls can pose a threat to low flying aircraft.
Excessive build up of droppings will lead to a significant amount of structural damage to boats, streetlights and buildings.
Identification:
Gulls typically have a light coloured body with black wing tips and a distinctive dark mantle that can range anywhere from deep black to light grey.
Time to call the professionals
Pest birds can cause a great deal of property damage in a very short time and can be difficult to manage.
If you think you may have a pest bird problem, don’t hesitate to contact us today and one of our Pest Control Officers will determine the best solution for your specific needs.
Look out for the next article in this series where we’ll be discussing the different methods of bird control that we at Steiner offer.